I’ve been working a side project as part of a “game jam” with this one group I hang out with, the Bay Area Devs Collective. “Game jam” is in scare quotes because while it has a theme (which I’ll get to in a second) there is no end date (it’s still not done technically) and there are only three of us participating. So the theme by popular vote of people that aren’t actually participating was: turn a violent genre non-violent. I was initially skeptical of this theme since I already gravitate towards non-violent genres and a mere reskinning of some other genre didn’t seem a profound enough change to be worth my while. But when we spent some time brainstorming the implications of this theme, someone surfaced the idea of cooperative chess, and I was pretty much immediately hooked. So yeah, I’ve been making a cooperative version of chess.

The core idea I landed on is that two players are simply trying to complete a game of chess, but I added a few constraints. I’ve long been fascinated by cooperative games where there is required private information*, the most notable being the card game Hanabi (though part of the board game Gloomhaven actually has a more relevant example). So I injected this concept into my Co-op Chess game. I do this by requiring both players to make a couple moves without knowing what the other is doing and therefore must implicitly coordinate to succeed. It’s especially nice because this requires the same sort of theory mind/prediction skills that are prevalent in normal chess, so much of the strategic complexity of chess carries over.

Co-op Chess is not quite released yet (there’s still some bugs and I haven’t fully figured how I’m going to present it to the broader public), but if you’re interested in playing, hit me up and I can show it to you. 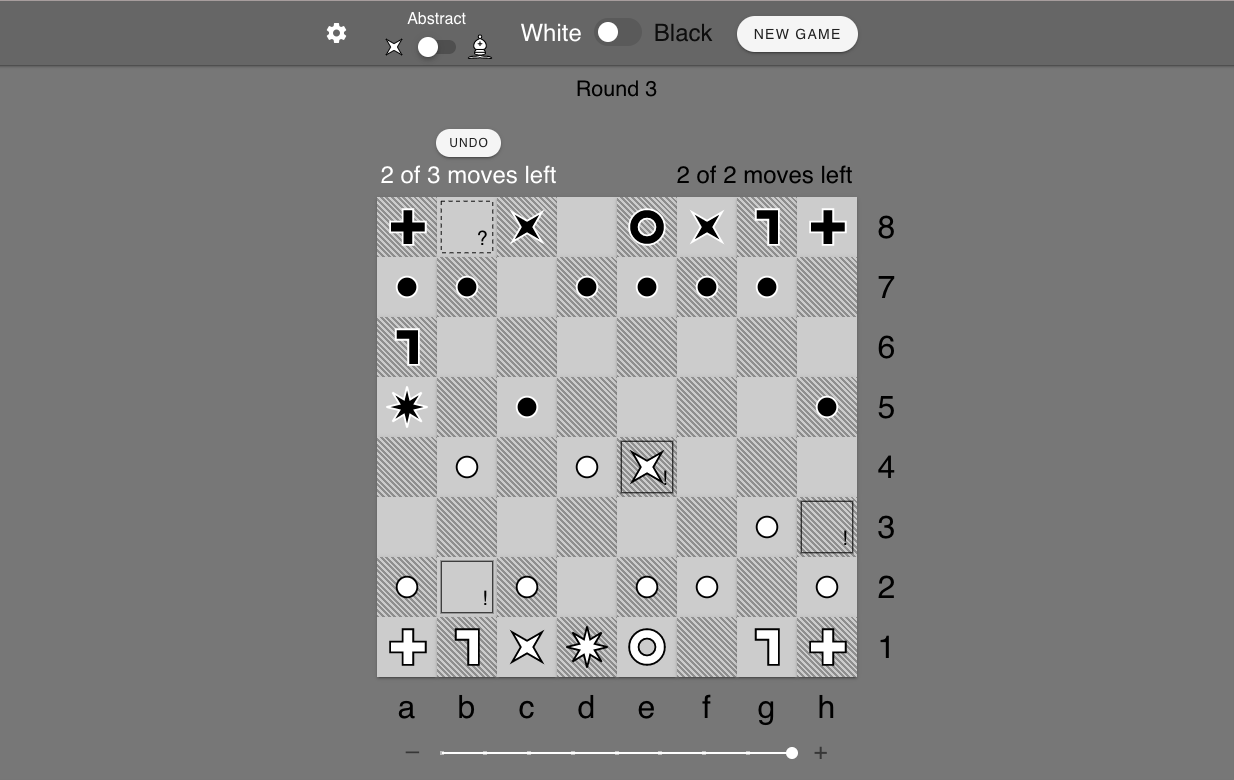 In other news, I decided to participate in this three month long game accelerator thing (https://www.hackubator.games/) where we will be assigned into teams of ~4 and shepherded towards making a game. Ever since finishing Obversion one of my goals was to do more teamwork, and since it hasn’t happened organically, this seems like a great opportunity to kick start it manually. As a result, I’ll probably be doing newsletter posts a bit less frequently. Actually, now that I think of it, I’d love to hear opinions about what the optimal post frequency for this newsletter is, so let know even it’s a curt “once a month”.

* Total nerd aside so feel free to skip this: my interest in cooperative but uncoordinated behavior even extends to my PhD days doing game theory, where I made up the problem of figuring out the computational complexity of finding a symmetric Nash Equilibrium of a symmetric cooperative game (i.e. both parties have the same utility function). Finding a non-symmetric Nash in a cooperative game (regardless of symmetry) is always easy since there is always a pure strategy Nash, but I conjectured that it was PPAD-complete (as hard as finding a normal Nash Equilibrium in a non-cooperative game) to find a symmetric Nash. Alas despite devoting more than a little bit of time to this it still remains an open problem.