The Timeless Way of Building

It’s been a light week for sharable Metasweeper content. I’ve been focusing on cleaning up some technical debt and getting a bit more playtesting in. More interestingly though, a steam curator that I reached out to maybe half a year ago told me that they started playing Obversion. They were actually quite effusive about it, but also had some nit-picky but good feedback. I always want to be responsive to this sort of thing (and I vaguely felt like it’s time for an Obversion update - plus this gave me a reason to learn how to implement key rebindings), so I’ve been spending the last week mostly working on that. While I was at it, it dawned on me that MagWest is this weekend and Obversion is one of the games represented so this was the perfect time to put Obversion on sale again. So I’ll be doing a 30% off sale starting Friday.

For the Metasweeper content that I did work on, I’d like to take the opportunity to do a bit of a design deep dive on recent changes to the first dungeon, the Temple of the Sacred Lattice: 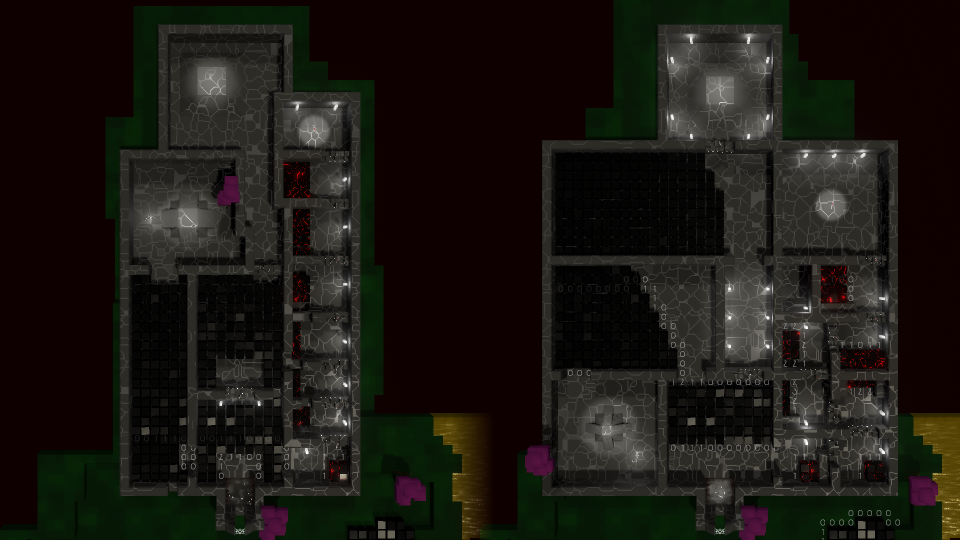 First thing to note is that the layout now conforms to a grid of 6x6 tiles. I made the original floor plan before I decided on a theme for the dungeon, but since I was going to redesign the layout anyway I figured a building devoted to a lattice should be more grid-like. This also allowed me to do a couple things like the make the optional tutorial/puzzle branch on the right wind in an S shape that I find more visually interesting (plus I snuck in a little secret room for me to connect up in the future).

I’ve learned a lot of level design lessons since I originally made this dungeon. One is that long skinny corridors like the one on the left of the original are not great. They tend to lead to situations where the player doesn’t know how to advance depending on the random placement of mines. Similarly, I find it’s a more satisfying experience when a room exposes a lot of tiles to start minesweeping from rather than a small beachhead at the entrance of a door. Putting this together, I replaced that tall skinny room on the left side of the original with the large room in the middle-left of the new Temple. You can also see the “open up a smaller beachhead” principle in the final room before the main dungeon reward: dead center (old) to upper-left (new).

Incidentally, I like how the new arrangement of doors from the opening room (bottom-center for both new and old) now has two doors to the north: one obviously open and the other implicitly closed. This makes it more clear that the open one is the way to advance and that the player doesn’t yet have the ability to open the other. Before, the open door was to the left and felt like it might be side content and the closed door felt like it might be openable if only the player could figure out how. And likewise the true optional content (to the right in both new and old) is now the only door opening to a side as befitting its status as side content.

The most important change though, and the reason prompting me to do this whole level redesign, is moving the room where you gain the flag ability from the top(ish) left to the bottom left. I found that the left corridor of the old version was not sufficiently inviting and players would sometimes be somewhat at a loss as what to do next. But now, this ability (something most players will remember is a crucial to playing minesweeper) is visible right from the start and gives the player an obvious goal. So hopefully there will be fewer players feeling stuck now.

Well, if you actually read through all of that, you must be pretty interested in playing Metasweeper. After I’m done wrapping up my Obversion changes, I’ll finally be ready for some broader playtesting. So ping me if you’re interested in participating in an 1-2 hour discord (or zoom or whatever) meeting so I can observe you playing.

P.S. The subject line comes from one of Christopher Alexander’s books and is one of the things I most aspire to in making games. Alexander (or at least Jesse Schell’s interpretation of Alexander) is also particularly inspiring when it comes to level design and is the best way I know to overcome what might be termed “level designer’s block”. I could talk more about the philosophy of The Timeless Way and how it applies to my level design, but that would be a separate, much longer essay.